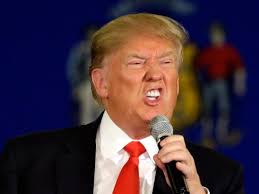 Love him or loathe him, America’s new president can message. Many aspects of Trump’s communications techniques are examples of what more marketers should be doing when it comes to thought leadership content.

“Thought leadership means continually creating and communicating insightful and persuasive ideas that clearly distinguish [Company X] on the topics that matter most to its current and future offerings.”

“Continually creating” – Trump tweets and retweets like he never sleeps. In the last year, has there been one day when he hasn’t hit the headlines? He knows what marketers often seem to forget: the key to effective thought leadership is to produce content regularly. We’re not talking a one-off white paper or occasional blog post but a steady drip of high-quality content that creates a successful – and sustainable – conversation with your target audi­ence.

“Communicating” – The “Great Communicator” nickname bestowed on Ronald Reagan could easily be handed off to Trump. Talk about knowing your audience. And talk about knowing how to use the media to communicate your messages for you.

Too many content teams spend too much time creating thought leadership content and not enough on communicating it – slicing, dicing, reusing, and promoting it across all sorts of channels.  The idea is to create content that gets heard by developing solid distribution strategies that span a variety of media.

“Insightful” – Sure, I can hear the groans of protest now (and I’m one of those voices if we’re talking about insight based on Donald’s depth of topic understanding). But if we reframe it in terms of the laws of entertainment, and what makes people sit up and take notice, Trump has insight by the truckload.

Marketers take note: To create thought leadership content that cuts through the clutter, think like someone in the entertainment business thinks about creating a TV show: focus on a single demographic, have a strong point of view, and tell a great story. And, of course, always leave them wanting more.

“Persuasive” – How did Trump crush every other candidate in the Republican race? How did he win over enough of those with doubts about him to clinch the highest office in the land? Because logic and reason do not persuade people – emotion does. And Trump is a master at setting off emotional triggers – those little zingers in our brains that make us happy, sad, fearful, or angry.

Keep this in mind the next time you kick off a piece of thought leadership content. How can you get your audience’s attention? What kind of reaction do you want to invoke? Can you tap into their competitive fears? Invoke nostalgia? Make them smile? Doing so is the key to creating content that strikes a nerve – and gets shared with others. After all, emotion trumps reason (ha ha – get it?).

“Clearly distinguish” – Trump’s speeches and interviews –- whatever you think of the actual content – are readily, perhaps even uniquely identifiable. Not only does the man himself stand out because he’s not and never has been a polished politician, but his messaging is clear and simple (though many might say, “Yeah, to a fault.”) The Trump tone is integral to the Trump brand.

How many marketers can say that their thought leadership really stands out just because of the way it sounds? Yes, everybody strives to avoid jargon; everybody wants to sound “everyman.” But everybody pulls their punches to avoid offending clients and to meet compliance guidelines – and everybody ends up sounding the same.

“Topics that matter most” – Time and again, Trump rips the scabs off the economic wounds of his voters: job losses, wage stagnation, immigration control: those are the things that matter most to them, right now.

Translated: the trick for marketers is to base thought leadership content on topics that keep your audience up at night – not on thinly veiled plugs for your company’s products or services. That’s the right way to make emotional connections that win hearts and minds (see “persuasive” above).

But our affirmation of Trump’s thought leadership credentials doesn’t end with our definition. He’s the artful master of the deal, is he not? As such, he underscores the idea that premium thought leadership is the product of great negotiation: provocative ideas from business leaders that are shaped by savvy marketers and crafted by well-informed, experienced writers and editors.

Think about it, folks.

A version of this post was published in May 2016.